Is My Toddler a Late Talker or Language Delayed? 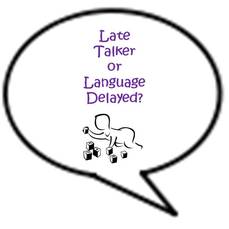 Your toddler wants to communicate, but he doesn’t know how to do it.  To get his point across, he grunts, cries, and points to objects he wants.  You’ve taken your child to his pediatrician just to be told, “He’ll out grow it.”   You may become frustrated when you see other toddlers using words and often ask yourself “Why can’t my child talk?”

Your toddler may be considered a late talker.  What is a late talker?  A late talking toddler is a child 18 months (1 ½ years old) or older who is using a limited number of spoken words for his or her age.  Late talking toddlers usually have a vocabulary of less than twenty words beginning at 18 months.  Some toddlers speak late due to hearing loss, speech disorders, language disorders, and various diagnoses such as autism, cerebral palsy or Down Syndrome.  However, late talking toddlers are usually typically developing in all other skills (fine motor, gross motor, cognition, and social/emotional) but speech.

To find out if your toddler is a late talker or may have a language delay, check out this article by the American Speech-Language Hearing Association (ASHA) called Late Blooming or Language Problem?

If you are concerned about your toddler's speech and language development it's important to remember that you do have options!  You can talk to your child's pediatrician, contact a local speech-language pathologist, or schedule a meeting with your state's early intervention program.  I wrote a past blog post that explains how to locate these professionals called, Help!  My Toddler Is Not Talking.  It's never too early or too late to ask about your toddler's speech and language skills!   To learn how you can help your toddler talk and communicate faster, be sure to check out my book on Amazon Kindle, Talking With Todders - 52 Tips to Boost Speech and Language Skills.
Tweet